Bakuchi (Psoralea corylifolia) is a leguminous, erect, annual herb that grows 60 -100 cm tall. It consists of dry ripe fruits of Psoralea corylifolia Linn. (Fam. Leguminosae). The plant contains rounded and straightforward leaves at the apex, and its flowers are bluish-purple colored. The fruits are slightly compressed and are about 5 mm long. Bakuchi is distributed mainly in tropical and subtropical regions like India, China, Southern Africa. In India, it is mainly found in Rajasthan, Bengal, Deccan, Uttar Pradesh, and Karnataka.

As per Ayurveda, Bakuchi helps manage Vitiligo spots because it is rich in Kusthagna properties and works as Rasayana, eliminates harmful toxins from the body and shrinks the white patches of an individual. It has its ethnomedicinal importance and plays a significant role in the management of various diseases. It has both curative values as well as nutritional values. Acharya, Charaka Bakuchi is described as Shaka Varga. Bakuchi (Psoralea corylifolia) every part is beneficial for medicinal use. Roots, leaves, stems, seeds are used to manage the skin problems, such as leucoderma, skin rashes, infections.

Bakuchi seeds have great medicinal values. They are purgative, antipyretic, antiemetic properties and are beneficial in urinary discharge, leucoderma, skin diseases. The extract of Bakuchi has been reported to possess antioxidant, anti-inflammatory, antibacterial, antifungal, antitumor, immunomodulatory activities. The plant formulation can be used externally as well as internally. For externally, it can be mix with some base oil, and internally, it can purify. 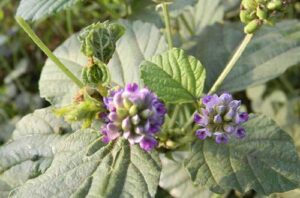 a) Macroscopic: The Fruits of Bakuchi are dark chocolate to almost black color with pericarp adhering to the seed-coat, which is 3 – 4 mm long, 2-3 mm broad, bean-shaped, somewhat compressed, glabrous, and closely pitted.
The seeds are campylotropous, non endospermous, oily and free from starch, odorless, but when the chewed smell of an aromatic essential oil felt, taste bitter, unpleasant, and acrid.

b) Microscopic: The transverse section of fruit shows a pericarp with depressions and prominent ridges. It consisting of collapsed parenchyma and large secretary glands containing oleo-resinous matter testa. An outer layer of palisade epidermis is much thickened in the inner tangential.

SAVE & ACCEPT
Request a Callback
Our Spring Sale Has Started