Jatiphala consists of the endosperm of dried seeds (kernels of fruits) of Myristica fragrans Houtt. (Fam. Myristicaceae), dioecious or occasionally monoecious aromatic tree, about 10-20 m high, found mainly in Tamil Nadu and to some expanse in Kerala, Andhra Pradesh, and Assam. For ages, Jatiphala has been used as a home remedy for various complications. Jatiphala, often also called Jaiphala, helps reduce inflammation and is beneficial in joint pain. It is used to provide mild, warm, and sweet fragrances to the dishes. 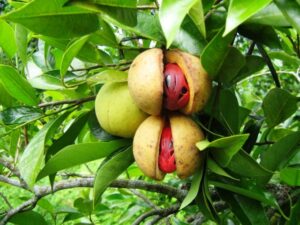 a) Macroscopic: Seed of Jatiphala are ellipsoid, 20-30 mm long and is about 20 mm broad. It is externally greenish-brown, occasionally marked with small irregular dark brown patches or minute dark points and lines slightly creased reticulate.

A small light-colored area at one end indicating the position of the radical, a groove running beside the line of raphe to darker chalaza at the opposite end, adjoined by a thin layer of perisperm with in folding appearing as dark ruminations in the abundant grayish-brown endosperm, embryo, in an irregular cavity, which is small with two widely spreading crumpled cotyledons and a small radical odor is strong and aromatic. The taste is pungent and aromatic.

b) Microscopic:Transverse section of endosperm represented peripherally perisperm, several layers of strongly and flattened polyhedral cells with brown contents, or containing prismatic crystals. The inner layer of the perisperm of thin-walled parenchyma is about forty µ thick, engulfing into the tissue of the endosperm to structure the ruminations.

It is holding numerous, huge 69 oil cells with brown cell walls, vascular strands in the peripheral region, multiple small spiral vessels, large celled, endosperm, parenchymatous with random tannin idioblasts with thin brown walls which contains a plethora of simple, rounded, and compound starch grains, with up to about ten components, usually 2-8 individual grains, up to twenty µ in diameter present, most of the cells with crystalline fat and frequently a large aleurone grain in each cell, containing a rhombic protein crystal up to twelve µ and small aleurone grains with slightly regular crystalloids, embryo, of shriveled and collapsed parenchyma.