Karkatashrngi (Pistacia chinensia) is one of the well-known Ayurvedic herbs. It has been used in various classical formulations from ancient times to manage various disorders associated with the respiratory and digestive systems. Different parts of the herb like roots, leaf, bark, and galls are filled with beneficial constituents but the most used part in Ayurveda is gall.
Karkatashrngi comprises gall-like excrescences formed by insects on the petioles, leaves, and branches of the plant named Pistacia chinensisBurgo, Pistacia integerrima Stew. Ex Brandis, Rhus succedanea Linn. (Fam. Anacardiaceae) during autumn, found on the steps of Western Himalayas from Indus to Kumaon at an altitude of 350 to 2400 m, often cultivated in plains of Punjab state.

The herb has been recommended in various diseases like Shwasa (asthma), Jwara (fever), Rajyakshama (tuberculosis), Hridya Roga (heart disease), Ajeerna (indigestion), and Yakrita Roga (liver disorder). As per Ayurveda, for respiratory ailments, it should be taken with honey. The churna form of the herb when used on the skin helps in fighting against many skin disorders because of its Ropan (healing) and Kashaya (astringent) properties. 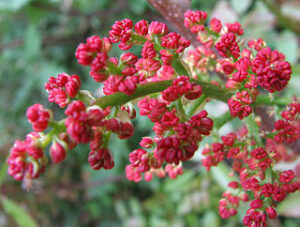 a) Macroscopic:Dried galls are hard, hollow, thin-walled, horn-like, generally cylindrical, tapering at both the ends, greyish brown externally and reddish-brown internally, size varies from 2.5 to 30.0 cm or more, each gall contains numerous dead insects, odor, terebinthine, the taste of powdered galls, strongly astringent and it is slightly bitter.

Karkatashrngi is mentioned in Ayurveda to be beneficial for Aruchi, Svasa, Chardi, Hikka, Jvara, Kasa, Kshaya. It also tends to have Kapha and Vata Hara properties which means it helps in balancing both the Doshas. It has Jwara Hara properties so is useful in fever as well and being Kshaya Hara is beneficial in respiratory ailments.