Have you ever visited a garden or even open area during stress & took a deep breath with close eyes? A simple inhalation gives you so much of relaxation & calmness & you feel refresh & happy most of the time. This is the power of nature. Natural or herbal treatment in any case is always better than taking the chemical based artificial medicines.
Especially, in breathing problems or respiratory diseases, Ayurvedic treatment serves its magical power by picking the root cause & then destroys it. It not just treats the existing problem but also balances the internal functioning & hormonal disturbance to avoid any other similar or related disorder in future. 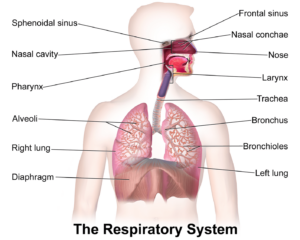 We all living beings breathe air (oxygen) as it necessary for our living. But increasing air pollution has become a serious global concern. The air we breathe is full of impurities, dust particles & harmful gases.

This makes our body more prone to diseases caused by these impurities & that too very easily. Diseases of the lung and airways are few common cause of illness among children in developed countries and a leading cause of their death in children.

When we breathe, we inhale oxygen, Red blood cells collect that & carry it to all the body parts where it is required and then collect Carbon dioxide & transport it back to the lungs so that it can  leave the body when we exhale. This exchange of gases is the way our respiratory system gives oxygen to the blood.

A Person Face Many Kind of Breathing Problems Like:

Respiratory problems can be as minor as the common cold or as serious as pneumonia. They may affect the upper respiratory system (nose, mouth, throat, sinuses) or the lower bronchial tubes and lungs. Ayurvedic Treatment for Respiratory Diseases helps to overcome these problems

Apart from above, there are many other causes of breathing problems. Some people have difficulty breathing when they get a cold. Others have trouble breathing because of occasional attacks of acute sinusitis. Sinusitis can make it difficult to breathe for a week or two until the inflammation subsides and the congested sinuses begin to drain. The nasal passage is a pathway for viruses and allergic substances to enter the lungs. So the nose and sinuses are often associated with lung disorders.

Often people only seek medical help after they have had breathing problems for weeks or months. By the time the medicines are started, damage has occurred that takes more time to heal.

An accurate diagnosis is important before you can treat and prevent breathing problems. Each of us is different. The specific medicine and treatment that works for a family member or friend may not be the correct one for you.

Symptoms of Asthma & other respiratory problems vary over time, and also differ in severity from one person to another. In case, it is not timely diagnosed & effectively treated, these problems often leads to hospitalization, missed work and school, less physical activeness, sleepless nights and even death in some cases.

You may have noticed that in a group of some people, just 2-3 people easily get affected by the cold, flu or other viral infection. It not happens by chance but because of two main reasons: either it is genetic or because of weak immune system. This thing is very crucial from the treatment point of view.

People who already knows that their genes are of such type or they are of Kapha Prakurti in the language of Ayurveda, then they must take precautions in advance to prevent themselves from getting infected by virus or flu. They must also try to make their immune system strong by using good herbs which are easily available at home like Haldi, Neem, Dalchini & Tulsi.

But it is not just for few people; even every one of us must take care of our strong immune system as its weakness is the root cause behind almost all the problems & not just respiratory issues. As winters get start, people should try to have light nutritional meals which are easily digestible & must increase the intake of above mentioned some easy available herbs which not just boosts the immune system but also useful to fight with various complications arise in winters like skin dryness, less physical activeness, digestion problems, swelling etc. Illness & Viral attack steals the body energy & freshness to a great extent. At that time, body rejuvenation is much required to restore the activeness of body & its organs.

Special herbs & Panchkarma therapies are very beneficial in rejuvenating the body. Ayurvedic Treatment for Respiratory Diseases helps to overcome these problems.
Respiratory problems are often treated with steroids that not just weaken the lungs if used for long duration but also have many side effects such as Dryness, viral infection, yeast infection, lowered immunity, rashes, thinning of bronchioles, psoriasis and many more.

Many respiratory problems occur due to increased secretion of mucus in the body. Various market available medicines just make it dry so that it cannot clog the nasal airways but this dry mucus get deposited inside the body only & don’t get out from it which creates problem in future as this small problem converted into serious one like Bronchitis etc.

Deep Ayurveda having the team of best doctors always focus on finding the basic cause of the problem which are related to digestion & lifestyle and curing them with Ayurvedic Treatment for Respiratory Diseases.

Various good herbs are provided to the patients in form of capsules, powders & syrups to boost the immunity system of the body and curing them with Ayurvedic Treatment for Respiratory Diseases & make it more defensive against infections & viral attack.

We have set our Ayurvedic clinic in Chandigarh with the aim of treating the Patients with the miraculous power of Ayurveda which not just manages the problem for a particular time but also treat it completely & in almost all the cases cure it 100%.

Deep Ayurveda provides all the above treatments but in the form of good herbs which have zero side effects as compared to the chemical medicines available in market which causes harm to the internal functioning of the body.

People should understand that the herbal treatment always take some time as it reaches till root cause & treat it but to make it a little faster & more effective , Deep Ayurveda has its Panchkarma treatments  available at its clinics located at various places in India which are very beneficial in chronic diseases & for body rejuvenation. We have already discussed the importance of body rejuvenation earlier in this article. Some of the Panchkarma therapies include:

For more detail or  advice on respiratory related treatment write to Dr. Baldeep Kour at drbaldeep@deepayurveda.com

Statutory Warning: Self medication can be very dangerous. Always use ayurvedic medicine under the strict supervision of an ayurvedic doctor.