Role of Ayurveda in Emergency Treatment

An emergency is a condition that requires immediate treatment where the patient is either conscious or unconscious. It is a belief in the common public that Ayurveda can treat only chronic and severe diseases, but not acute diseases. But in actuality, this belief is wrong, misguiding, and devaluating. Acute or emergency diseases are very well treated by Ayurvedic treatment, and it was proved from the Ayurvedic texts so the role of Ayurveda in Emergency Treatment. is also very important. There is no doubt that Allopathy medicines have saved millions of lives and emerged as the best option to go to in the case of severe illness. Side by side, it often comes with some complications and side effects, as it doesn’t cure a disease of its root cause. But Ayurveda plays a big role in emergency conditions because the scientific principles of Ayurveda handling the emergency in classical compendium were the researches done ages ago by the seers.

Ayurveda is also known as the “Science of Longevity” because a complete system to live a long healthy life is available here. This field rejuvenates the body through proper diet and nutrition and provides a great system for empowerment, a system of freedom, and long life. The Ayurvedic field is a traditional system of medical treatment and also time-tested treatment existing in India for more than 5000 years, and it is endowed to the world by the Sages of ancient India. The Ayurvedic field is mainly based on a holistic approach to the treatment of disease, maintenance of health, and outlook on life in general. We all know that the existence of Ayurveda lies since the ancient era and due to its extremely helpful and wonderful benefits it still exists today.

What Are The Side Effects of The Modern Medicine System? 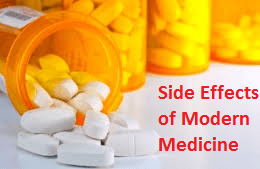 Due to the regular use of Western medicines a person has to suffer from lots of side effects, contraindications, and withdrawal effects as well. For instance, with continuous intake of antibiotics such as Azithral, a person may suffer from nausea, diarrhea, weakness, and other symptoms, in that case, he/she have to meet their doctor again and get injected, which would additionally require some other drugs to suppress these side effects. Also, intake of anti-depressants or sleeping pills, a person gets extremely addicted to those medicines. The main point is, these kinds of medicines only suppress the signs, and symptoms of a particular disorder or disease but these would cause some other health troubles to a person. Also, if a person suddenly stops those medicines it may turn out to be extremely dangerous to them because they don’t know that when is the right time to stop them, because Allopathy medicines will be continued for many years, especially when you are on the treatment of never-ending issues or severe conditions like arthritis, high blood pressure, diabetes, thyroid, etc.

Does Ayurveda have Lagged Behind in Emergency Treatment?

On the other hand, there is no doubt that the ancient practices don’t only focus on suppressing the existing symptoms but provide relief to a patient by determining the root cause of a disease. Because, Ayurveda is well known to cure the disease of its root causes, without any side effects or withdrawal effects. Although, Ayurvedic medicines also have some contraindications to a very small extent but it depends on the dosage of medicines, manufacturing type, depending on a person’s body’s response towards a particular ingredient, etc, but the chances are really rare and effects are mild. So, its totally myths and wrong perception that there is no Role of Ayurveda in Emergency Treatment.

The Ayurvedic field has been criticized for no availability in the treatment of an emergency treatment, which is merely a belief. There are many reasons behind that, one may be aroused whether there was no emergency in ancient times and people were suffering only from chronic ailments? And we also found complete documentation in the literature of Daruna and Ashukari (emergency) diseases, which imply that emergency conditions were also, managed using ayurvedic medicines.

Due to some causes, there is a big gap observed in Ayurvedic literature. This may be due to the dark medieval period which was nearly 2000 years. During that period, there were many attacks, and this was the main reason for the break to the development of Ayurvedic science in the world.  Many books were destroyed during the medieval period, ancient literature is outrageous by few scholars, and few references are lost at that time.

The knowledge of Ayurveda originates from our Ayurvedic Acharyas from many years of experience, observation, empiricism, and intuition that are passed over generations. Ayurvedic medicines mainly work on the mechanism of ‘defense strategy’ rather than ‘offense strategy’ by making the host body so strong as it will be able to deal with various physical and mental stresses. By understanding the cause of the disease, Ayurveda mainly targets eating, breathing, digestion, thoughts, memory, sleep, and other lifestyle activities which are easy approaches helpful to gain good health. Hence, Ayurveda has been resuming because of a better understanding of fundamental principles and evidence-based presentation of its therapies.

Mode of Treatment in Ayurveda

In Ayurveda, there are mainly three treatment modalities that are useful in the treatment or management of any disease; these are Ahara (Food), Vihara (Lifestyle, exercise), and Aushadha (Medicine). There is a famous quote, “Let thy food be the medicine” which defines the importance of food. Also, Ayurveda has a quote that says, “If the food has been taken in the right quantity, right time, and in right forms there is no need of medicine but if the food has not been taking by right forms then the medicine will not be effective. So, healthy food is very responsible for our life, and also for healthy well-being. A person who follows the Ayurveda concept enjoys a long-standing track record of successful treatment and cure of both acute and chronic diseases. On Role of Ayurveda in Emergency Treatment  An emergency is a condition that requires immediate treatment where the patient is either conscious or unconscious. It is a belief in the common public that Ayurveda can treat only chronic and severe diseases, but not acute diseases. But in actuality, this belief is wrong, misguiding, and devaluating. So, role of Ayurveda in Emergency Treatment (Acute or emergency diseases ) cannot be neglected in any means.

Acharya Charka has cleared the concept of treatment on the classification of Mrida (mild) and Daruna (severe). Daruna is a condition where the disease is acute or requires prompt treatment, but it doesn’t mean that it is incurable. Acharya charka clearly said there are many such diseases which though acute and severe are yet curable.

For instance, even if a person suffers from diabetes, they are free to take herbal supplements along with other medicines like bitter gourd, turmeric, aloe vera, cinnamon, etc. These supplements balance the blood sugar levels naturally and also control the secretions of other hormones.

The Allopathy field is mainly based on laboratory information and hardcore evidence, and it basically claims to reduce whatever symptoms a person faces. But in an Ayurvedic field, medicines are recommended as per the dominating dosha and according to the history taken. Because Ayurveda believes that a supplement being well suited to one person may or may not be suitable for another.

Conclusion on Role of Ayurveda in Emergency Treatment

Ayurveda has immense potential to create a healthy society by maintaining and sustaining the health of coming generations. Every individual has to adopt Ayurveda in their daily life to get a healthy and disease-free life. Ayurveda contains numerous herbs that worked well in acute as well as chronic diseases so the Role of Ayurveda in Emergency Treatment is also very important. Don’t compromise your health with harmful chemicals and adulterated medicines. ‘’Health is Wealth’’, so, adopt Ayurveda in daily life to boost the immunity and prevent your health from various harmful infections and diseases.