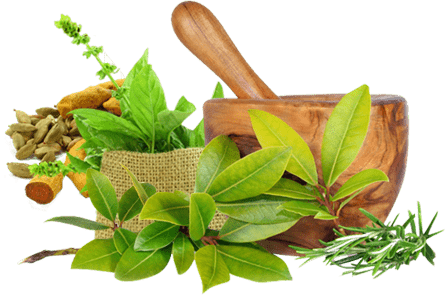 What is Ayurveda- Introduction :

Indra, in turn, taught Ayurveda to a group of assembled sages, who then passed down different aspects of this knowledge to their students. According to history, Ayurveda was first described in text form by Agnivesha, Book named “Agnivesh tantra” later on this book redacted by Charaka, and became known as the Charaka Samhita. Second early text of Ayurveda is the “Sushruta Samhita” which was compiled by Sushrut, the primary pupil of lord Dhanvantri, sometime around 1000 BC. “Maharishi Sushruta” is known as the Father of Kshar Sutra (Surgery). 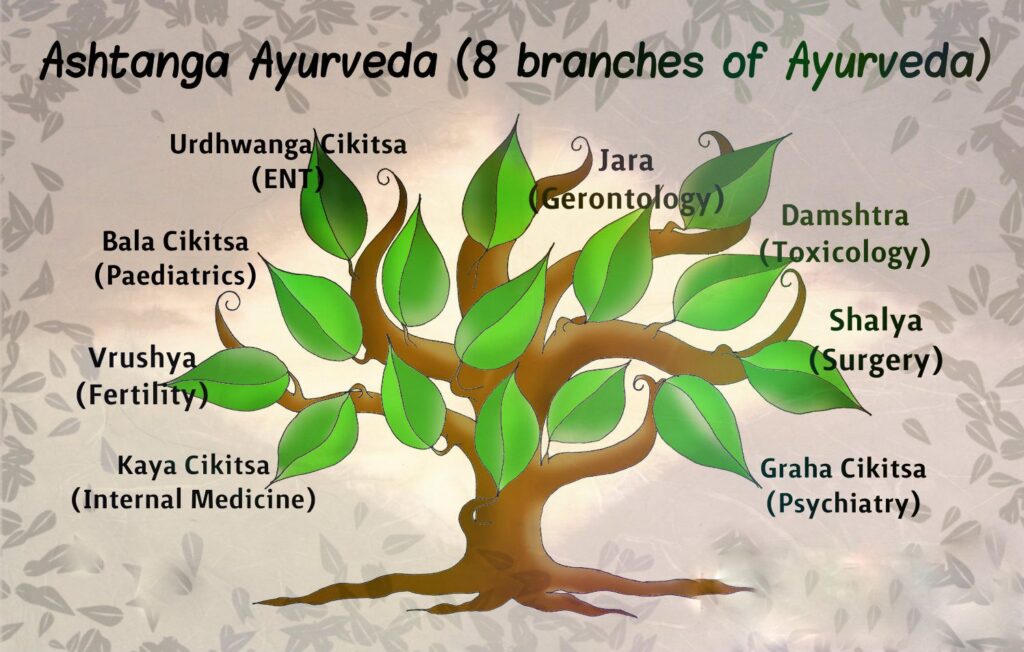 “Preservation to the health of the healthy person and treating ailments with different methods of ayurvedic treatment mentioned in Ayurveda”.

Definition of Health According to Ayurveda

Health is defined as the state of Balance of functional humor, metabolic
fires, tissues, and excretions with a pleasant soul, senses and mind 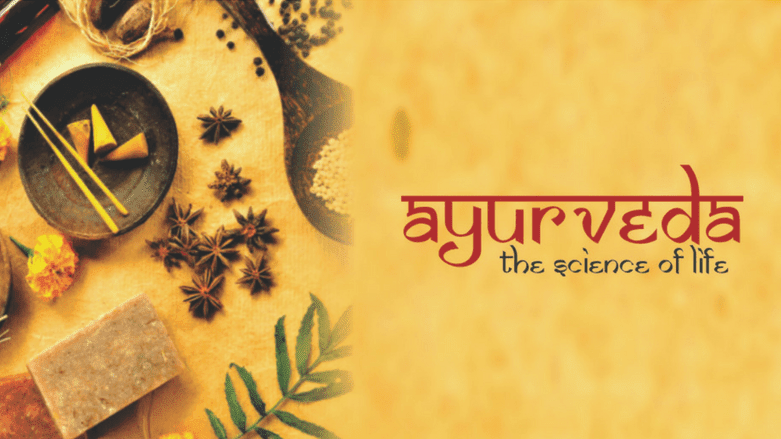 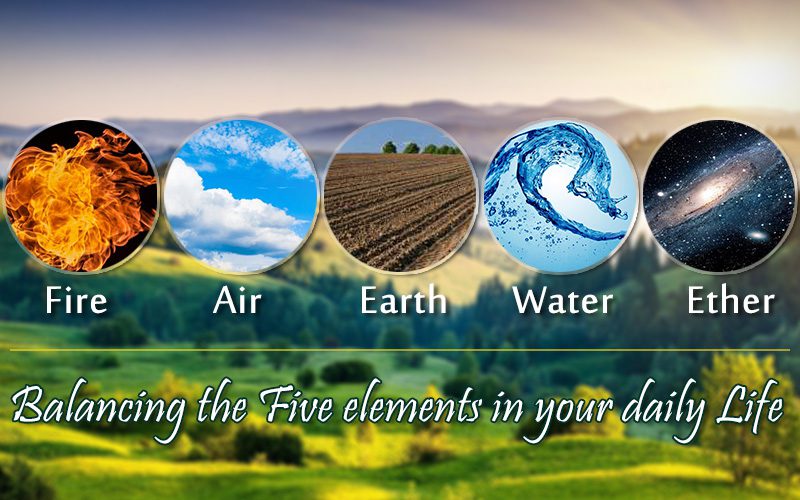 Theory of Pancha Mahabhuta or “five great elements” of Ayurveda are: 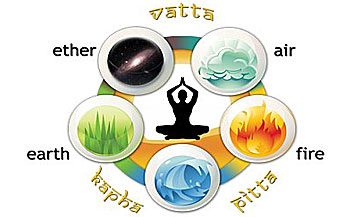 “Tri-doshaTheory”-  The central concept of Ayurvedic medicine is the theory that health exists when there is a balance between three fundamental bodily senses of humor or tridoshas called Vata, Pitta and Kapha.

Every person contains all three doshas. However, the proportion varies according to the person, and usually, one or two Doshas are predominant. Within each person, the Doshas are regularly interacting with each other and with the Doshas in all of nature.
This explains why a human can have much in similar but also have an endless variety of individual characters in the way they behave and respond to their environment.

In Ayurvedic ideology, the five elements associate in pairs to form three dynamic strength or synergy called “doshas”. Dosha means “that which changes.” word taken from the root dus, which is correlative to the English prefix ‘dys’, such as in dystrophy, dysfunction, etc. In this sense, dosha can be the witness as a fault, error, mistake or an infringement against the cosmic rhythm.

Vata: is the air principle necessary to mobilize the function of the nervous system, brain functions, sensory organs

Pitta: is the fire principle that uses bile to direct digestion & hence metabolism into the venous system.

Kapha: is the water principle that relates to mucous and lubrication and the carrier of nutrients into the arterial system.

The Doshas are continually moving in dynamic balance, one with the others. Doshas are required for life to come into existence. In Ayurveda, dosha is also known as the organizational principles of Ayurveda as every living thing in nature is characterized by the dosha.

Functions of the Doshas 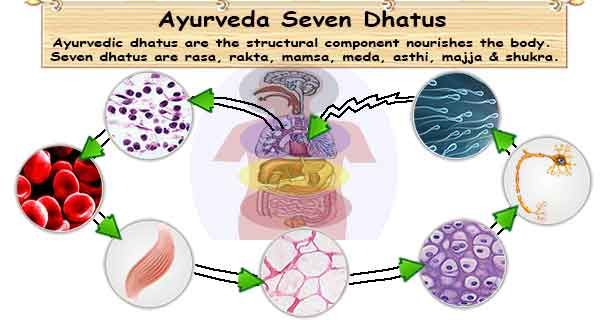 Agni in Sanskrit means fire and is used to describe all metabolic functions in our body.
“A defective fire leads to improper functioning of the tissues which in turn, creates Ama in the gastrointestinal tract and leading to the poor synthesis of tissues.”

Jatharagni – One Agni present in the stomach and duodenum.
Bhutagni – Five Agni from five basic elements.
Dhatwagni – Seven Agni present, one in each of the seven dhatus-tissues 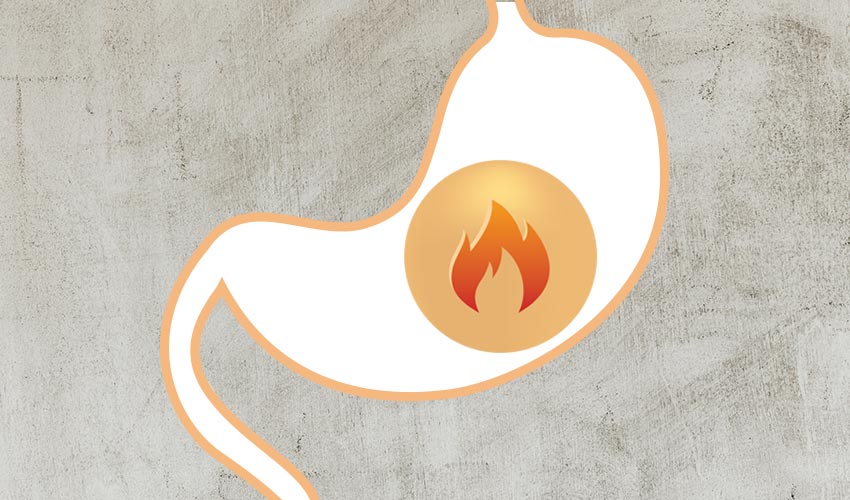 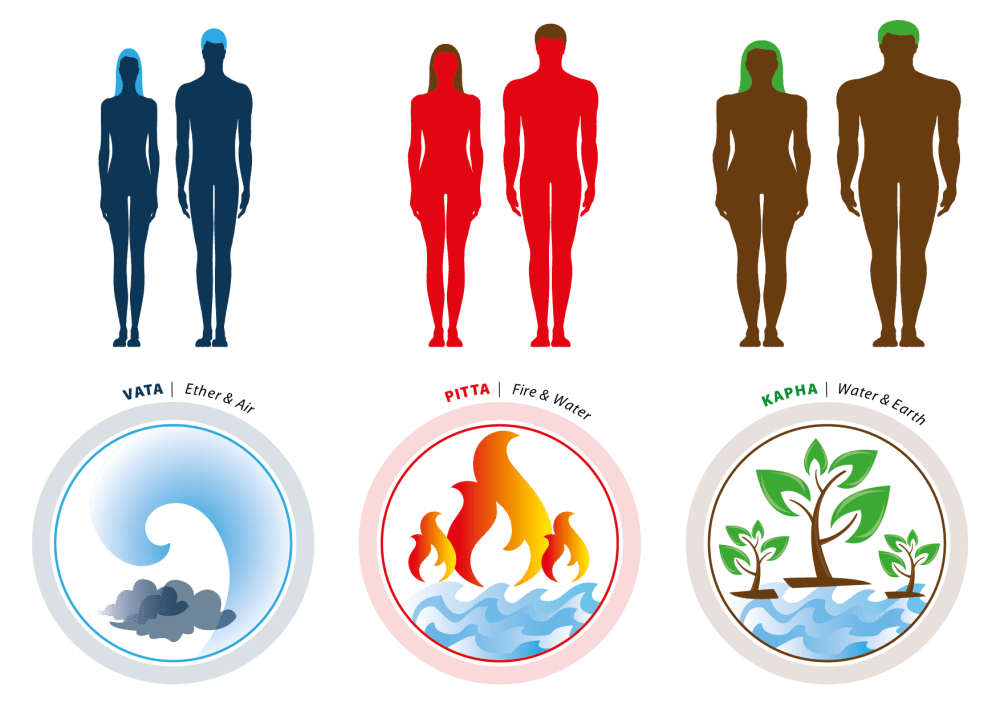 What is PRAKRUTI (Consistency)

According to Ayurveda, Prakriti or the distinctive personality of an individual is driven by a combination of the Tridoshas – Vata, Pitta, and Kapha.
These three doshas rule a person’s health, diseases, a cure for any illness, etc. It is the blend of these three doshas that makes a person different and unique from others.

As per the Ayurveda text following are the factors, which determine the Prakriti of the fetus:

Role of Ayurveda for Wellness

Ways of treatment in Ayurveda

Modern surgery is also gifted to the world by the renowned Ayurveda guru maharishi sushrut who is a well-known surgeon of ancient time and who is even doing successful plastic surgery like rhinoplasty, organ transplant, eye surgeries without anesthesia & antibiotics.

Slow Healing- Ayurveda medicine working on root cause on different parameter and
secondly patient comes with chronic illness that’s take some time but heals properly without any side effects.

This is the wrong myth, In Ayurveda, we use each and everything which is available in nature to heal diseases and to prevail health. In Ayurveda books, there is mention a proper way of purification of these herbs, metals, minerals, poisons, etc to use them as a medicine in appropriate dosages according to Prakriti (body), Desh (Country/region) and Kaal (seasons) and lots of studies also done on that.