Kantakari (Solanum xanthocarpum) comprises of mature, dried whole plant of Solanum surattense. It is a perennial, very thorny diffused herb of wasteland, found all over India.

Kantakari is widely used in managing various types of Jwara, Kasa, Hikka, and Tamaka Swasa. A lot of Ayurvedic formulations consist of Kantakari as one of the key ingredients. The plant is known for various pharmacological activities like antibacterial, antifungal, anti-asthmatic, anthelmintic, and hypoglycaemic properties. 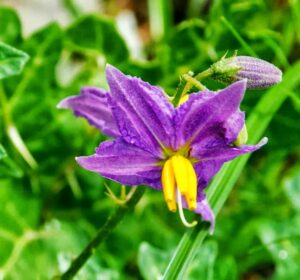 The external surface is light green, when dry, the surface is yellowish-green and smooth, transversely smoothened surface shows a fragile bark and prominent wood, the center represents a significant and distinct, pith, mature and dry stem frequently with a hollow core, fracture short to slightly fibrous.

Leaves: The leaves are petiolate, exstipulate, ovate-oblong or elliptic, sinuate or sub-pinnatifid, subacute hairy, 4 to 12.5 cm long, and 2 to 7.5 cm wide, green, veins and midrib complete with sharp prickles, odor, and taste are not distinct.

Fruit: The fruit is berry globular, measuring about 0.8 to 1 cm in diameter, and is surrounded by persistent calyx at the base. The unripe fruits variegated with white and green strips, ripe fruit shows different white and yellow shades.

Seeds: Seeds of kantakari are circular, numerous, flat, embedded in a mesocarp about 0.2 cm in diameter. The glabrous taste is bitter and acrid.

b) Microscopic: Root: The transverse section of mature root manifest cork composing of 3 to 6 layers of thin-walled, rectangular, and tangentially elongated cells, cork cambium single-layered accompanied by 6 to 15 layers of thin-walled, tangentially extended to oval or circular parenchymatous cells, stone cells are either single or groups of 2 to 20 or even more present in this region, secondary phloem consists of sieve elements and phloem parenchyma crossed by medullary rays, stone cells present in singles or groups of 2 to 20 in outer, and middle phloem regions, phloem rays 1 to 4 cells wide and 2 to 22 cells high.

The cambium 3 to 5 layered of thin-walled rectangular cells, xylem composed of vessels, tracheids, fiber tracheids, parenchyma and transversed by the medullary rays, all elements being lignified, tracheids and vessels with bordered pits, fibers with hardly any simple pits, xylem parenchyma rectangular or lightly elongated with simple pits and hardly with reticulate thickening, xylem rays 1 to 3 cells wide and 1 to 20 cells high, micro sphenoidal crystals of calcium oxalate as sandy masses and simple starch grains existing in the secondary cortex, phloem, and medullary rays.

Stem: The transverse section of mature stem, 1.5 to 2 cm thick consists of 6 to 12 layers of cork of thin-walled somewhat rectangular cells, epidermis remains complete for a long time. The secondary cortex consists of 7 to 11 layers of parenchymatous cells. Some cells are thickened and lignified establishing stone cells. The primary cortex remains intact even in quite a mature stage but later on, it gets crushed.

The xylem comprises parenchyma, fibers, vessels, tracheids, and traversed by xylem rays. The vessels vary broadly in size and shape and show bordered pits. Tracheids are elongated with irregular walls and bordered pits, fibers are much elongated, thick-walled, and lignified with tapering and pointed ends, some having truncated lots or bifurcated at one or both ends with a few simple pits, tracheids fibers compact than fibers, with both ends tapering and having reticulate thickening, xylem parenchyma cubical to rectangular with simple or bordered pits or the reticulate thickening, xylem rays conspicuous by their pitted thickenings, longer in size and radial elongation of cells, 1 to 2 or rarely 3 cells wide and 2 to 25 cells high.

The internal phloem consists of sieve elements and parenchyma, forming a more or less continuous band and embedded in per medullary zone, a few phloem fibers similar to those of outer phloem region are also present, a central region occupied by a large pith, micro sphenoidal crystals of calcium oxalate as sandy masses and simple starch grains present in the cortex, secondary cortex, phloem, medullary rays, and the pith cells.

Lamina: transverse section represents dorsiventral structure, epidermis on either side, wavy in outline, covered externally by thick cuticle, on upper side mesophyll consist of a single-layered palisade and 4 to 6 layers of loosely arranged spongy parenchyma, some stellate hairs (4 to 8 armed) present on both sides of the epidermis, anisocytosis stomata present on both surfaces, vein-islet number 46 to 80 on the lower epidermis (mean 63), 61 to 80 on the upper epidermis (mean 70), stomatal index 20 to 25 (mean 22.5) on the lower epidermis, 14 to 24 (mean 19) on the upper epidermis, palisade ratio 1.7 to 4 (mean 2 .85).