Arka (Calotropis gigantea) is a perennial shrub having a 2.5-meter in height. It is a widespread and valuable herb seen widely throughout India. It mainly consists of dried roots of Calotropis gigantea (Ait.) R. Br. (Fam. Asclepiadaceae). Arka has a bunch of flowers that are white or lavender. It has a milky stem and is rich in cardiac glycosides, calcium oxalate, and fatty acid.

Calotropis gigantea is commonly found in most parts of the world with a warm climate, dry, sandy, and alkaline soil. The leaves of Arka (Calotropis gigantea) are sessile and sub-sessile, opposite, ovate, cordate at the base. The flowers are about 3.8 to 5.1 cm in size, with umbellate lateral cymes, and are colored white to pink. The seeds are broadly oval, compressed with a tufted micropylar coma of long silky hair.

The milky discharge of the Arka (Calotropis gigantea) has abortifacient (causing abortion), spasmogenic and carminative, anti-dysenteric, anti-syphilitic, anti-rheumatic, antifungal, diaphoretic properties and widely used in the treatment of leprosy, bronchial asthma, and skin diseases. The powder of root bark is traditionally used for getting relief in diarrhea, stomach ulcers, intestinal worm, and dysentery as it has carminative properties and helpful in indigestion. 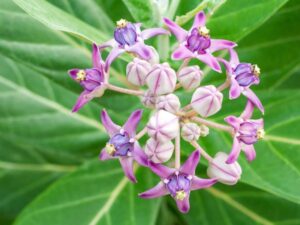 Some cortical cells contain sieve tubes thick-walled, rosette crystals of calcium oxalate, and phloem consists of sieve elements and parenchyma, which are more prominent towards the inner region of the phloem. Within the phloem, cambium is present, consisting of 2-5 rows of tangentially elongated cells, thin-walled, which forms a central part of root composed of vessels. The fibers, tracheids, and xylem parenchyma, present throughout the xylem region and arranged radially in 2-7. The xylem fibers are long, lignified with wide lumen, tapering on ends, and simple pits on walls.