Asoka (Saraca asoca) tree plays a vital role in Ayurveda and is one of the legendary sacred trees of India. It consists of dried stem bark of Saraca asoca (Rose). Syn. Saraca indica Linn. (Fam. Leguminosae), mainly found in Central and Eastern Himalayas, Western Ghats, and Deccan. It also occurs in central and eastern Himalayas up to 750 m altitudes.

Asoka tree has pinnate leaves having 4 to 6 pairs of leaflets and is almost 30 cm long. The leaflet of the tree is 12 cm long and 5 cm wide. The flower of Asoka lacks petals and occurs as clusters. Sometimes, they directly grow from the main stem. The clusters are thick and have a mix of red and orange colors, and they consist of numerous, long-tubed flowers, which open out into four oval lobes. And they get a shade of pink as they age gradually.

The water extracts of bark of Saraca asoca are effective in vitro against Staphylococcus aureus, Pseudomonas aeruginosa, Proteus Vulgaris, and Klebsiella pneumonia. Also, the water extracts of the leaves of the plant show antibacterial activity only against Escherichia coli. Moreover, the methanolic activities of its leaves are effective against Bacillus subtilis, Pseudomonas aeruginosa, and Salmonella typhimurium. The seed, bark, and flowers of Ashoka (Saraca asoca) are mainly used in biliousness, dyspepsia, ulcers, burning sensation, chronic fever, menorrhagia, fibroids, cysts, astringent, Diabetes. It effectively work in uterine stimulant, estrogenic effects, abortifacient. Its properties help to purify the blood and prevent the onset of allergies and various skin allergies. 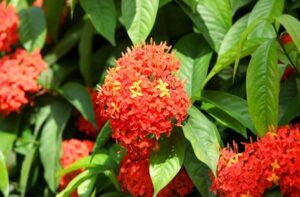 a) Macroscopic: The bark of Asoka is externally dark green to greenish-grey, smooth with circular lenticels, and transversely ridged, sometimes cracked. Internally it is reddish-brown with fine longitudinal strands and fibers.  A thin whitish continuous layer is seen beneath the cork layer. Its taste is astringent.
b) Microscopic: The transverse section of stem bark shows periderm consisting of a broad layer of cork which is radially flattened narrow cork cambium. Its secondary cortex is wide with one or two continuous layers of stone cells with many patches of parenchymatous tissue, sclereids that contain yellow masses, and colorful crystals. The secondary phloem consists of phloem parenchyma, sieve tubes with companion cells, and phloem fibers occurring in groups.