Bibhitaki (Terminalia bellirica) is a large deciduous tree found throughout India. It consists of a pericarp of dried ripe fruits of Terminalia bellirica Roxb. (Fam. Combretaceae). It is 10-12 m or more high, commonly found in plains and forests up to 900 m elevations, fruits ripen towards November. The trunk of the tree is brownish-grey and straight. Fruits are grey colored and oval. Terminalia bellirica is indigenous to tropical Asia including India, Nepal, Bhutan, China, Sri Lanka, Pakistan, Malaysia, and Indonesia. In India, it is mostly found in the plain dry forests of Assam, Tamil Nadu, Kerala, Gujarat, Odisha, and Andhra Pradesh.

The word Bibhitaki or Vibheetaki consists of two words, ‘Vibheeta’ means ‘lack of fear’ and ‘ki’ means the ‘fruit’. Thus, it symbolizes ‘the fruit which takes away fear of diseases’, and it is deemed as the ultimate remedy for most health anomalies. Baheda is very effective in the nourishment of dhatus in the body and gives miraculous results. It acts as a rejuvenator, anti-bacterial, anti-inflammatory, and provides multiple health benefits to an individual. 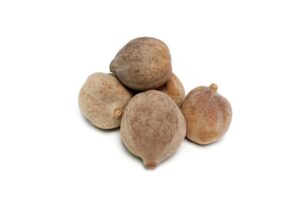 a) Macroscopic: Bibhitaki fruit is nearly spherical to oval; it is approx 2.5-4.0 cm in diameter. The fresh ripe fruits slightly silvery or with a whitish shiny pubescent surface. The mature fruit is grey or grayish-brown with a somewhat wrinkled appearance. The rind of fruit shows variation in thickness from 3-5 mm, and taste is astringent.

b) Microscopic: The transverse section of bibhitaki fruit shows an outer epicarp consisting of a layer of the epidermis. Most epidermal cells elongate to form hair-like protuberance with a swollen base composed of a zone of parenchymatous cells. It is slightly tangentially elongated and irregularly arranged, intermingled with stone cells of varying shape and size.

The stone cells are found towards the periphery and spherical in the inner zone of the mesocarp in groups of 3-10. The mesocarp traversed in various directions by multiple vascular strands, bundles collateral, and simple starch grain. A few peripheral layers are devoid of starch grains, rosettes of calcium oxalate and stone cells present in parenchymatous cells, endosperm composed of stone cells running longitudinally as well as transversely.