Candrasura (Lepidium sativum) is the famous Ayurvedic Herbs consisting of dried seeds of Lepidium sativum Linn. (Fam. Cruciferae), a small erect, annual herb, about 15-45 cm high, cultivated throughout India. It is an annual, fast-growing edible herbaceous plant that belongs to the Brassicaceae family. The plant also has various traditional uses and is the best source of edible oil used for lighting.

The seeds of Candrasura were used as an aperient, diuretic, demulcent, carminative, galatogogue, tonic, emmenagogue, that will help to overcome the symptoms of throat diseases, uterine tumour, nasal polyps and breast cancer. Also, the seeds were supplemented in the diet of lactating women to increase the milk secretion during the postnatal period. The other parts of Lepidium sativum possessed antidiabetic, antioxidant, anticancer, anti-inflammatory, antipyretic, analgesic, cardiovascular properties that provides other health benefits to an individual. 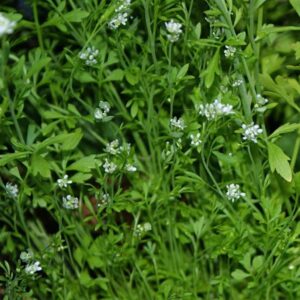 a) Macroscopic: The seeds are small, smooth, oval-shaped, pointed, and triangular at one end, having about 2-3 mm long, 1-1.5 mm wide, and are reddish-brown. A furrow is present on both surfaces extending up to two-thirds downward, and a little wing-like extension present on the edges of the seed. When it is soaked in water, the seed coat swells and gets covered with transparent, colorless mucilage, taste, mucilaginous.

The flowers of Lepidium sativum have white or slightly pink petals, measuring about 2 mm. The silquae are elliptical elates from the upper half and glabrous and is measures about 5 to 6 mm. The pods are ovate, roundate, and emarginated. Candrasura fruit is flattened, pale green to yellowish, margins are wing-like, apex emarginated, and is usually 2-seeded. The leaves have long petioles and are lyrate pinnatipartite. The infloroscence of Lepidium sativum is in dense racemes.

Powder: It is Cream-yellow with several reddish-brown fragments of seed coats. It shows pieces of the seed coat under a microscope, some showing red coloring matter, and others with uniformly thick walls, endo sperm oily.