Chronic Obstructive Pulmonary Disease (COPD)  is the most common lung disorder and is primarily used as an umbrella term for mainly two conditions: Emphysema and Chronic Bronchitis and is the fourth leading cause of death and its prevalence has been increasing steadily over the past 20 – 25 years. Someone having the condition of COPD may have one or both of these issues, and the severity of each varies from person to person.

In India, Chronic Obstructive Pulmonary Disease (COPD) is considered the second most common disorder of lung disorder after pulmonary tuberculosis. Nowadays, the disease is frequently encountered in middle-aged patients and is rare below 35 years. It was noticed that COPD affects males more frequently because of excessive smoking and is a leading cause of chronic morbidity and mortality among patients over 55- 60 years, and it is equally prevalent in rural and urban areas.

The global initiative for chronic obstructive lung disease Chronic Obstructive Pulmonary Disease (COPD) defines COPD as a disease characterized by progressive development of limitation of chronic airflow that is not fully reversible and is used to describe several health conditions, which include chronic bronchitis, emphysema, and small airway disease.

It was noticed that smoking, pollutants, various environmental factors, and genetics all play a role in the development of COPD. Out of all these, smoking is the #1 controllable risk factors for COPD. Much attention should be placed on helping people to stop smoking because other air pollutants are more difficult as they may not be within someone’s choice or ability, such as those who live in polluted and industrial cities or work in industrial environments with polluted air.

Out of these, non-controllable risk factors include autoimmune diseases or genetic mutations that react in a hypersensitive or allergic way. The most common causes are:

Excess exposure to tobacco smoke: The most common significant risk factor for COPD is the use of long-term cigarette smoking. The more years a person smoke, the greater the will be a risk. Other than this, cigar smokers and marijuana smokers, Pipe smokers also are at great risk. About 20-30% of chain smokers eventually are at great risk of Chronic Obstructive Pulmonary Disease (COPD)

Age: It was noticed that most people who have COPD are over 40 years old.

Asthma Patients: It was noticed that the combination of Asthma and smoking increases the risk of COPD even more. If a person suffers from a chronic inflammatory airway disease, may be a risk factor for developing COPD.

Genetics: The uncommon genetic disorder alpha-1-antitrypsin deficiency is the main cause of some cases of COPD.

The above said are already mentioned in various classical Ayurvedic texts:

The most common symptoms of COPD are: 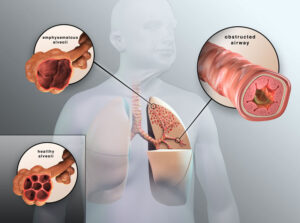 In COPD, inhalation of various toxic substances – particularly inhalation of tobacco smoke, etc. leads to swelling of the lung tissue and it results in the damage of tissues. The results of the lung tissue damage effects mucus hyper secretion, airway narrowing and results in fibrosis, destruction of the parenchyma, and vascular changes. These pathological changes lead to the limitation of airflow and other physiological abnormalities resulting in various clinical features of COPD.

Increase in the number of goblet cells in bronchi

In Ayurveda, Srotas is the channel or structure through which ‘Sravanam Karma’ i.e. flowing, oozing, moving, and permeation of different constituents and nutrients of the body takes place. Pranavaha srotas is the transport system of ‘Prana’ which has been narrated as vital air inhaled and also be the vital energy of the body responsible for every activity of living being. Most of the lakshanas explained in the dushti of Pranavaha srotas are related to the respiratory system so it has been related to the respiratory system.

Pathogenesis according to Ayurveda:

In Ayurveda, when we talk about channels, they help the body to complete different physiological processes, and Lungs play an important role because these present a complete cluster of millions of channels. The channels work as a place of exchange between air and blood. The carbon dioxide (bad air) moves out and oxygen comes in, this process is called ‘Prana’.

Due to various causes, e.g., polluted air, excess intake of oily, fried, sour, salty food, addiction to cigarette smoking, etc, the channels become obstructed and a lot of mucus appears and results in a block of the air passage. Thus, there is no space for the air to move and air traps in. In that case, the body doesn’t get proper oxygen, and this leads to the death of tissues and fibrosis of the lungs occur. This makes COPD a deadly disease.

Kapha and Ama increases in Amashaya

This vitiated Kapha moves upwards and reaches the respiratory system

And producing obstruction in the respiratory tract (Pranvahastrotasa)

Normal movements of Prana Vayu are hampered and moves upward

Causes according to Ayurveda:

The most common causes of COPD as per Ayurveda are given below:

Symptoms according to Ayurveda:

Acharya Charaka and Sushruta have included Haridya as the site of Pranavaha Sarotas and also they include the lung and the whole respiratory apparatus, thus the heart and lung disorders manifest with shwasa as one of the symptoms. The major symptoms include:

Diet and Lifestyle Modifications for COPD:

The diet and lifestyle modifications for COPD are given below:

Also, Rasayana plays a very important role in the rejuvenation of cells, tissues, repair the damaged cells, and provide multiple health benefits to an individual. A person can include Ayurvedic classical Rasayana in their day-to-day life. These are Pippali Rasayana, Chyavanaprasha, Agtsya Haritaki , Vyaghri Haritaki, Haridra Khanda, Ashwagandha, Guduchi, etc. can be used as Rasayana.

Seasonal and timely shodhan should be performed by the patient’s power, strength, e.g., strong patients may undergo Vamana, Virechana, and Niruha basti, and Nasya therapy in appropriate seasons. These types of therapies alleviate Kapha and may dry up excess mucous secretions in the Pranavaha Srotasa (respiratory system) and help to overcome the associated symptoms and work on the root cause.

Deep Ayurveda had made ‘Swasani Lungs Detox Formula’ after many research and clinical trials by an experienced Ayurvedic Doctor’s team. This includes a Lung’s detox syrup and 100% vegetarian shell and extract-based capsules. Swasani is a formulation with 100% pure herb extract that is used for respiratory-related issues from ancient times and their references are taken from different Classical Ayurvedic texts. This formula effectively works in all kinds of respiratory issues like cold, cough, congestion, breathing problems, asthma, COPD, decongests the pulmonary system, improves the immune system, and prevents a person from various seasonal respiratory challenges.

The main thing in Swasani Lungs Detox Formula is that it is 100% natural and doesn’t contain any chemicals, steroids, preservatives, alcohol, so every age of person can use this product without any fear.

The ingredients of Swasani Lungs Detox Formula can be mentioned below:

Anantmool (Hemidesmus indicus): It is Tridosha Shamak and is rich in anti-inflammatory, anti-oxidants, and effectively clears the obstructive passage. This herb contains a high amount of H. Indicus, desinine, Rutin, Hexatriacontance, thus expels the toxins from the deep tissues and provides a clean & clear passage for easy breath.

Shirish (Albizia lebbeck): It effectively balances the tridoshas in the body. The leaves of Shirish plant have anti-tubercular, astringent, and anti-histaminic actions. The herb is mainly used to manage all types of respiratory ailments like common cough, Asthma, chronic cold, flu, allergic rhinitis, allergies, COPD, bronchitis, and viral infection.

Vasa (Adhatoda vasica): Vasa works wonders in chronic respiratory tract infections, useful in vomiting, cold, cough, rhinitis, etc. As it is rich in anti-viral, antimicrobial, antibacterial, and antiseptic properties makes Vasa herb the ultimate solution to ward off various infections. It expels out all the phlegm accumulated in the lungs and clears the obstructed passage.

Dalchini (Cinnamon): This herb is used for many years for respiratory problems due to its antiseptic, antibacterial, antiviral, and mucolytic properties thus clear the channels.

Tulsi (Ocimum sanctum): known as” Queen of Herbs” in Ayurveda and has been used for thousands of years in Ayurveda for its various medicinal properties. This herb is rich in antimicrobial, antioxidant, anti-inflammatory, chemopreventive, radioprotective, neuro-protective, cardio-protective, anti-diabetic, analgesic properties.

Other than these ingredients, the product is enriched with various amazing herbs that effectively work on COPD at the root cause.

Stop using Alcohol-based, Honey-based, full of chemical, and preservative products, these types of products severe the condition in the future and results in various complications. Adopt Ayurveda, and in Ayurvedic products, choose only high-quality, natural, and pure products.

For more detail on ‘COPD’ please visit our nearest clinic or if you want to consult with our Chief Ayurveda Consultant & Founder – Dr. Baldeep Kour then write with detail history at info@deepayurveda.com