Dhataki (Woodfordia fruticosa) (Linn.) Kurz. (Fam. Lythraceae) is much-branched, semi deciduous, undershrub and is having about 1-3 m high; rarely up to 3 m. The branches of Dhataki are long and multi spreading. The leaves are simple and covered with white hairs. The flowers are in a cluster and are red-orange. The fruit contains many smooth and tiny brown seeds. 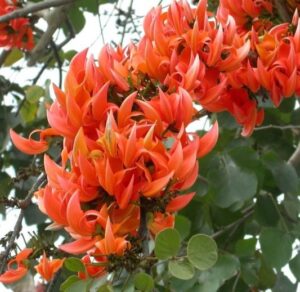 a) Macroscopic: The Flower of Dhataki (Woodfordia fruticosa) is about 1.2 cm long and occurs as single or in bunches of 2-15. The calyx is about 1.0-1.6 cm long, ridged and glabrous, and the color is bright red when fresh, but on drying, it fades. A very minute accessory sepal is attached outside the juncture of the calyx tooth and is deeper in color. The petals are 6 in numbers and are stuck inside the mouth of the calyx tube, slightly longer than the calyx tooth.

The filament filiform is curved at the apex, keeping anthers inside calyx-tube, and is almost rounded or broadly ovate. The carpels are united in 2, ovary superior, style filiform, long than ovary and stamens, taste, astringent.

b) Microscopic: The transverse section of sepal shows a single-layered cuti secularised epidermis, provided with both glandular and covering trichomes. The epithelial is multi-cellular, long, and is consisting of a thin-walled stalk and a globose. The unicellular thick-walled is broad at the base and pointed at the apex. The ground tissue consists of thin-walled, parenchymatous cells provided with very few sparsely distributed covering trichomes. The transverse section of filament shows an epidermis composed of single-layered tangentially elongated cells and is covered with a very thick-cuticle ground tissue that consists of thin-walled parenchymatous cells with intercellular spaces and is surrounded by a vascular cylinder of spirally thickened vessels.

The transverse section of anther shows a single-layered epidermis covered with a cuticle followed by several layers of thickened cells and is surrounded by pollen-sacs having numerous pollen grains measuring approximately 12-16 µ.

The main indications of Dhataki are Vrana, Visarpa, Atisara, Raktapitta,