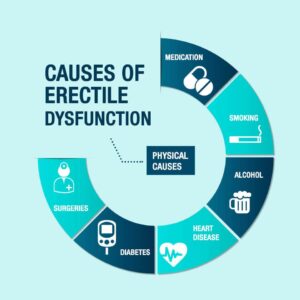 Numerous factors seem to be responsible for causing erectile dysfunction, e.g. certain drugs medications (anti-depressants), neurological disorders, Cavernosal disorders (Peyronie’s disease), etc. Sometimes impotence can be traced back to certain health problems like diabetes, severe depression, or severe reaction to any drug. Excessive alcohol drinking and cigarette smoking too are causative factors. Psychological factors are also major causes of impotence and can be due to some reasons including the increased focus on sexual performance in society.

In Ayurveda excessive intercourse (without using aphrodisiacs), perverted sexual habits and vitiation of vata dosha have also been blamed for causing ED. Whatever the cause, the problem of ED can be very embarrassing and disheartening for both the partners and if it continues for a prolonged period, the psychological factors involved worsen the situation and can cause an unhealthy aversion to sex.

Klaibya or ED is primarily Vata disorder, strengthening therapies are utilized in Ayurveda. Vajikarna is a branch of Ayurveda that deals with aphrodisiacs and contains many effective therapies and herbal solutions that can completely cure this disorder.

Some herbs used in erectile dysfunction:

For more detail or  advice on erectile dysfunction related disorder please us write us at : info@deepayurveda.com

Statutory warning : Self medication can be very dangerous. Always use ayurvedic medicine under the strict supervision of an ayurvedic doctor.

One thought on “Erectile Dysfunction Management”